As promised here is the recipe for the Roasted Pepper Spread which I found in Ball's Blue Book of Preserving - I cut the recipe in half, but I will post the full amounts. 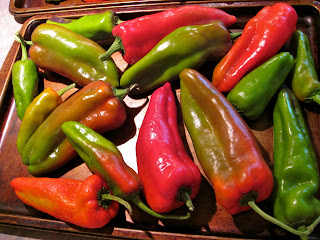 The first step is to roast the peppers and they advise roasting whole and then skinning and seeding after the roast process, BUT the trick with this is to cut them in half and seed them before you roast them.   This is from my own experience - I find it much easier to de-seed first.....less messy, less time and no frustration.  Once the peppers are roasted they become oily and the skin does slip off, but those seeds are a challenge to clean up!   I really don't think it will affect the taste at all - a roasted pepper is a roasted pepper, but I could be wrong.  Ok .... roast under a broiler at 425 degrees until the skin wrinkles and chars in spots - 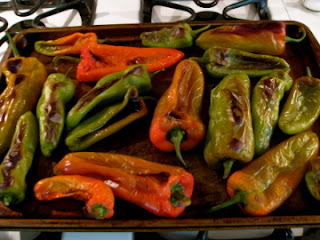 Place the peppers in a brown bag to cool for 15 minutes.   Then you roast up the tomatoes, garlic and onion called for in the recipe the same way and cool.   Peel the peppers, tomatoes; remove tomato seeds and mince up the onion and garlic.   Then puree in a food processor or blender the peppers and tomato. Combine everything in a large sauce pan and boil; then simmer until the mixture thickens. 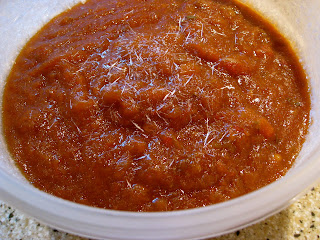 Here is the finished product which I froze and thought would make an excellent soup base for a Roasted Red Pepper and Tomato soup which we love - soup or spread, it's a keeper!

I also blanched and froze a harvest of green beans so we have some for our winter meals and checked on the Jacob's Cattle bean which is a dry bean and close to harvesting. 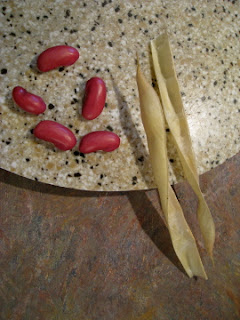